October 27, 2018. Cedar Park, a northern suburb of Austin, TX. Noon. More than forty female quidditch players mostly, but not all from Texas were drafted onto three teams to participate in the first all-nonmale fantasy quidditch tournament. About 40 more people showed up to spectate and volunteer.

The three teams had been assembled by a snake-style draft, which had the benefit of spreading out the best-known top players rather equally between the three teams – in contrast to auction-style drafts where a disparity in both big names and overall numbers is common. Black team’s Kaci Erwin and Lauren McGarrah, Blue’s Becca DuPont and Emily Hickmott, and Red Team’s Abbie Simons and Kat Hayworth stood out, both figuratively as well-known female players and literally as towering over many of their opponents and teammates. As the pitch was prepared for the first game, nervous energy filled the air as very few of these players had even played in a single nonmale game, and now they were about to play in a full-blown tournament.

The format was decided on by the people – quite appropriate, since the Texas Secede League is “For the people,” according to league commissioner Beth Peavler. The tournament would be only the second tournament held in Texas since the adoption of USQ Rulebook 12 with its new boundary rules. As an added wrinkle, this tournament would also incorporate two-arm tackles as an experiment. The novelty of all these moving parts meant that people weren’t sure what to expect, but eager to find out. 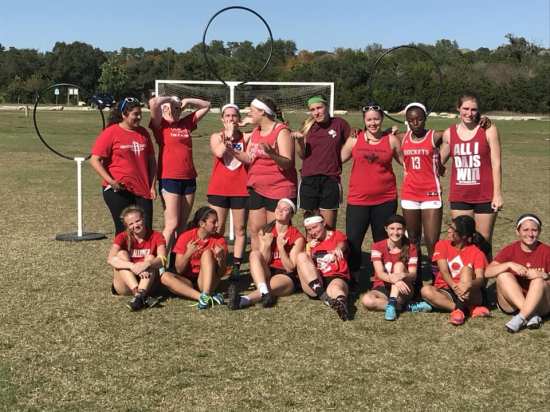 The first game was between Red and Blue, and from the first brooms up it was clear this would be as intense and physical as any MLQ or USQ game. The chasing and beating games were well-matched, with DuPont’s physicality and Hickmott’s veteran savvy driving Blue’s scoring while Red’s Olive Jim-Daniels standing out as an elite athlete on both offense and defense.

A lot of offensive drives seemed to stall as players unaccustomed to ball-handling were urged on by their teammates when beaters inevitably clashed at quarter-pitch. Blue team’s Peavler made a big impact at beater, and Victoria beater pair Alex Andres and Celeste Salazar both had a major impact, especially on defense. Red held a small lead as the snitch came on pitch, and the snitch on pitch play ramped up to a chaotic fever before Autumn McArthur, one of the very few dedicated female seekers in Texas pulled to give Blue the 90*-70 win.

The second game between Black and Blue teams opened up with Black running up a 50-10 lead early in the game as Erwin took on primary ball-handling duties, and scored repeatedly with an unblockable midrange shot. Once Erwin subbed out, Blue worked its way back into the game, pulling the game back within range by the time she came back in. Leif Montgomery was snitching, and made good use of the new boundary rules to force unwary seekers out of bounds for back to hoops calls. The game continued on as the two teams fought to push the other out of range to no avail.

The quaffle ended up trapped in a scrum for quite a while as the beaters prioritized snitch and seeker play. Black pulled ahead 100-70 when Blue team pulled the snitch again, sending the game to overtime. After a scrappy exchange of goals with no snitch pull, the game went to double overtime. One frantic scramble later and Blue team scored to win 120-110*.

Black faced off against Red team for game three, but Red couldn’t find an answer for the Black team’s physicality. The Black team seemed to adjust the quickest to the two arm tackles, and while Red’s beaters would frequently get the better of an exchange on offense, their passes went out of bounds or right to the Black keeper on too many drives. The game was well out of hand by the time the snitch was even on pitch, leading to a 170*-70 win by Black.

Now that the first round robin was complete, the second round robin set began with a rematch between Blue and Red. Both teams were already starting to show their exhaustion. Many of the players were clearly unused to filling some of the more physically demanding positions in the game like point beater, point chaser, primary ball carrier, and keeper. At one point, Simons commented that she was not as good at keeping as she thought she would be. Despite her height advantage, the positioning and communication that are part of the keeper position were new to her.

At one point in the match, an empty handed beater walked right in front of her and whacked the bludger out of her teammate’s hand from behind, creating total chaos. Red team held Blue team close, and with the snitch on pitch, the more experienced Red beaters held firm against Blue’s quaffle and snitch game again, but without a seeker capable of making progress against the snitch it was ultimately a matter of luck or time. Red’s luck ran out first as Blue team collected their third snitch-range pull. 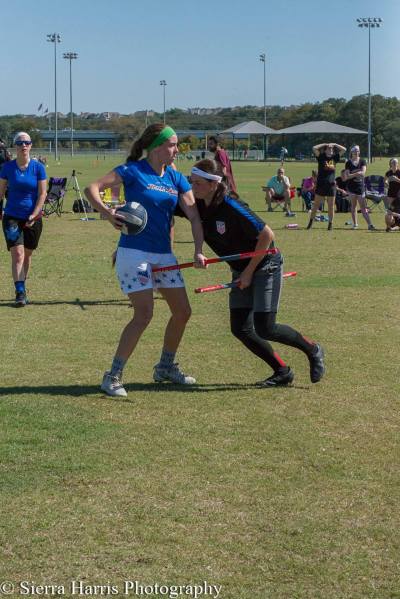 The keeper situation is really heating up down in Texas. Photo credit: Sierra Harris

Blue and Black’s rematch became a de facto championship game, but Black quickly pounced on Blue’s exhaustion to drive the score well out of snitch range. Peavler suggested that the larger team size was a double-edged sword, ensuring more subs but forcing back-to-back games for each team repeatedly, and Blue drew the short end of this stick. The score was well out of range when Black finally pulled the snitch, securing their second out-of-range victory to clinch the championship.

After some discussion, Red still wanted to play their last game against Black, and it was now Black team that looked gassed. Red’s chasers were making better passes working the ball around the field, and their beaters forced a number of fast breaks, including a low-light reel miss by Olive with literally no one within ten yards. Red’s play was completely suffocating by the time the snitch was on pitch, and Kat’s snitch pull ensured Red’s honor was salvaged with a 130*-40 win.

Further notes from the tournament, in no particular order:

One final time, thank you to Beth Peavler, from everyone who enjoyed this tournament and hope to see more in the future.